Starting in PeopleTools 8.53, there is some support for JSON data processing via the the Documents Class API. However, it seems rather basic and rudimentary.

I was starting to write some code against some REST APIs on the web and ran into a major limitation with JSON processing in the current functionality as of 8.53.06.

It turns out that the JSON parsing in 8.53 assumes that the JSON has a root node similar to XML. For example, If the JSON returned from a web service looks like this it cannot be handled. There are data elements in the root.

The Document Class assumes you have something more like this. Note the inclusion of the “return” root node. 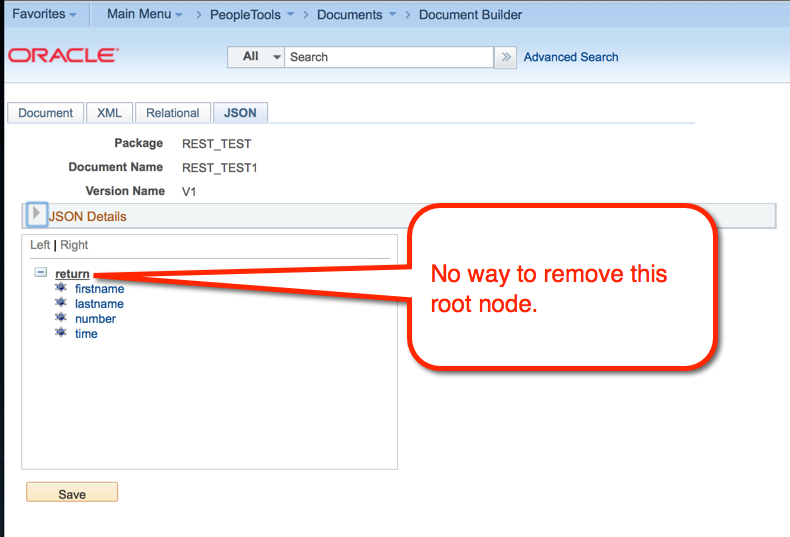 I opened a case with Oracle support and there was some indication that there may be some fix in 8.54 for this. However, at the time of writing this article there was not a release date announced for that yet.

I came up with a prototype solution that I have not used in production yet. You only need to do this if the web service does not return a root object. Here is what the code example below is doing:

I would really like to see the ability to parse JSON similar to the XMLDoc Class. With that class, you can parse XML dynamically. With the “Document Class” API, you have to know the data structure up front and configure it in the setup table. This is less than ideal as an API could change or return variable structures depending on different conditions. In these variable cases, the processing code may need to parse and respond in different ways.

Additionally, I am finding that the Document class is very buggy.

I am starting to see why the Campus Solutions has a JSON parser written in pure PeopleCode SCC_COMMON:JSON